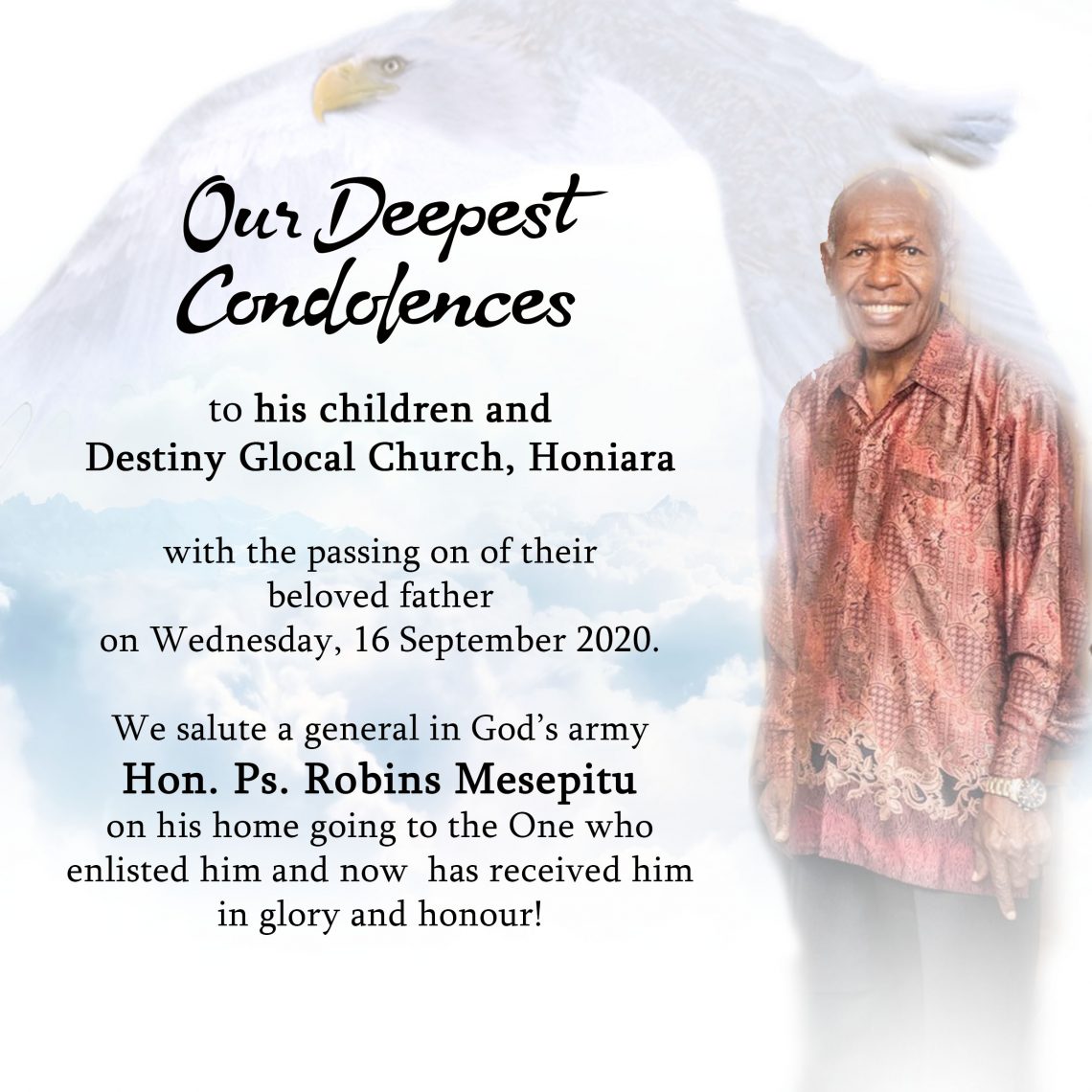 To His Children & Destiny Glocal Church, Honiara with the passing on their beloved father

A Tribute to the late Honorable Ps. Robins Mesepitu, my son in the faith.

At this celebration of his life, we of the ISAAC family honor Ps. Robins Mesepitu as a spiritual general in the Kingdom of God. His love and passion for God and all things spiritual was very contagious. He did not lack the expression of exuberant joy, heartfelt laughter and a broad grin on his face.

My first memory of Ps. Robins was at our International Intensive Training (SOP) in Muar, Malaysia in October 2003. I told him I have much to teach and impart to him and asked him what he wanted. His swift reply was, “I want all that you got!” There was no way of spiritually satisfying him as he was always hungry for more. He kept pursuing this relationship and served me as a true son in the faith and covenant brother to all those who knew him in ISAAC. It was 17 years ago when he first came to Muar and he had faithfully returned each year to attend a total of 40 conferences and training schools. As he learned, he took the truth and revelations received, modelled in his church and spread them in the different regions of the Solomon Islands. He became a strong prophetic voice in the land. Ps. Robins had an effective way to motivate others that was unique to his character.

Prior to coming to Muar in 2003, Ps. Robins was already servicing in his nation as Minister for Women, Youth and Sports (1997 – 1998) and Minister for Police and National Security in 1998. Despite his political accomplishments, he always remained very humble and relational. He was a good father to his children and an extremely loyal husband to his late wife, Ps. Noelyn.

His achievements as a pastor lack no praise. After connecting to us in ISAAC, he pioneered a member of thriving Christian Schools in various parts of the Solomon Islands. He always kept a national agenda in his heart as he served his community, build families and raise leaders to move his nation to the next level.

The nation has lost a great general. The church has lost a wise master builder, and we have lost a true and honourable son.

Nevertheless, we give praise to God that Ps. Robins has entered into greater glory and is greatly rejoicing in heaven before the Presence of His Lord and King! We know that he will be richly rewarded for all his labour on earth and he is so happy that he is now re-united with his precious wife, Ps. Noelyn for eternity.

Ps. Robins will still be heard and continue to change lives as his legacy has now been transferred to the next generation. He will always be looking down and cheering us on to the finish!